Yana Daniels latest to sign up with new-look Reds

The lifelong Liverpool supporter spoke about having butterflies as she walked around Anfield on her signing day, explaining to LFCTVGO that growing up in Belgium "the English teams are quite big and I always liked Liverpool"

When Yana first heard of the Reds interest in her she thought "it can't be true that I can play there. I didn't think about it for a long time... it felt right to just go for it." 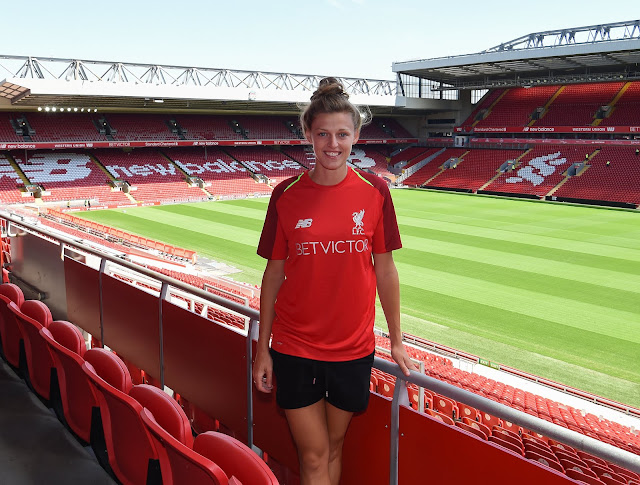 Yana has spent the last season at Bristol City, joining the Vixens after representing Belgium in last summer's UEFA European Championships and has played for her country at every age level - scoring six in 16 games in youth internationals.

Prior to joining Bristol, Yana had recently got back into playing football with Anderlecht having suffered a potentially career-ending injury and spending two years on the sidelines.

“It was complicated, I tore my LCL three times and when I tore it again it wasn’t possible to just make it again because it was already torn so they did a different kind of surgery. So they broke my leg to put it in another position and take the pressure away and I needed three surgeries in a year. It took me two years and three months to get back and I’m so happy I’m back.

“Because of the breaking thing… it’s complicated because the position of your whole body is different, and they usually do it with old people so it’s not quite something they do with younger people especially not sports people, so they said the chance that you can play sport again is really low – especially at the high level. They said just focus on rehab and walking straight again, just normal things in life. That’s what I did so I didn’t think I was going to play again but I was on the team staff for two years – as a video analyst – so that was really cool, I thought that was how my passion for football would be in the future. But I missed playing so I tried again… it’s hard to let it go if you love it.”

I spoke to Bristol City Development Squad player Ellie Strippel to find out what Liverpool supporters can expect from Yana during this upcoming season.

Ellie says Yana is skilful, quick, direct and shows great positional sense - "can always count on her to be in the right place to score."

Having played alongside Yana, Ellie also said that you "can always rely on her to give 100% if she's in the first team or the development side."

A "proper team player, a good person to have around the team" who "always looks out for her team mates and is a great person to look up to for younger players.

These are sentiments echoed by Bristol match day volunteer Martin Radford who says "Yana will give 100% in every game. She's got goals in her and scored a couple of very good ones last season."

Of Yana and Jasmine (Matthews, who also joined this week from Bristol), Martin said "what you will get off the field are two very nice, very approachable players. Great with the fans and generally two lovely people."

Signing new players is always exciting and when that new player happens to support your club, I believe it makes it that little bit more special.