Liverpool Ladies fell to their first defeat of the Women's Super League this afternoon to an Arsenal Ladies side determined to lift themselves from the bottom of the league.

Liverpool were boosted by Kate Longhurst and Katie Zelem returning from injury, the latter making her competitive début for the reds and impressing - holding her own in midfield with an eye for a good pass.

Unfortunately for Liverpool despite the return of a number of players to full fitness, goalkeeper Libby Stout missed out with a leg injury while Katrin Omarsdottir will also be out for 3 weeks.

In place of Stout in goal was Danielle Gibbons, who has already deputised for the No.1 this season. Gibbons stood strong between the posts, with a string of saves in the first half - particularly doing well to tip a goal bound Danielle Carter effort over and saving well from Kelly Smith. In front of Gibbons was the centre-back pairing of Becky Easton and Gemma Bonner, with Lucy Bronze moving out to right-back and Corina Schroder at left-back.

A scrappy opening with neither team managing to get a grasp on the game seen chances at both ends, Natasha Dowie heading over Corina Schroder's cross and a crunching Easton tackle at the other end seeing off an early Arsenal attack. Amanda DaCosta also seen a header go wide of the post from a corner.

Lucy Bronze was the stand out player yet again for Liverpool, the PFA Player of the Year revelling back on the right foraging forward and sending balls into the box. Bronze went closest to opening the scoring after cutting in from the wing and curling a shot towards the goal, gunners keeper Emma Byrne had to stretch to tip the strike over the bar.

Back out for the second-half, early on it looked as though Liverpool would be the team to break the deadlock. Amanda DaCosta unable to control a Lucy Bronze cross in time to shoot before being dispossessed and Katie Zelem with a shot on target.

Unfortunately for Liverpool they were to concede their first goal from open play in the league, Rachel Yankey's corner being bundled over the line by Casey Stoney.

After going a goal behind Matt Beard made two changes, with Claudia Walker and débutante Nina Frausing replacing Katie Zelem and Kate Longhurst. Walker made an immediate impact, chasing every ball and adding some much needed fresh legs to the Liverpool attack. The two substitutes created an opening minutes after coming on, Frausing sending a cross to Walker who's shot was blocked by the defender.

Martha Harris was also a late substitute, replacing Amanda DaCosta and also finding herself thrown straight into action sending brilliant cross into the box - Byrne got there to collect just before Walker.

It's always disappointing to lose a game, but there are positives to take from today's game; Katie Zelem's return from injury, Danielle Gibbons' performance in goal and an outstanding individual performance from Lucy Bronze. Liverpool just couldn't find the breakthrough that they needed to break down the Arsenal defence but they will bounce back.

One Liverpool player was on the winning team today, it was announced yesterday that Megan Alexander is to spend 3 months on loan at WSL2's Oxford WFC and the reds left-back helped the side to their first win of the season - 2-1 away at Durham.

Next up for Liverpool Ladies they too will make the trip to Durham in the Continental Cup next Sunday, the next home game will be on Saturday 12th July vs Doncaster Belles.

36 days after being held to a 1-1 draw by Birmingham City, Liverpool Ladies will resume their title defence with a home tie against Arsenal Ladies.

Since then a number of players have featured for England, with Fara Williams equalling the all-time caps record and looking likely to break it during the August friendly with Sweden. Lucy Bronze and Natasha Dowie also featured for the senior national side as they beat both Belarus and Ukraine, while Martha Harris and Ellie Stewart were with the U23s as they beat Sweden and lost to Norway. 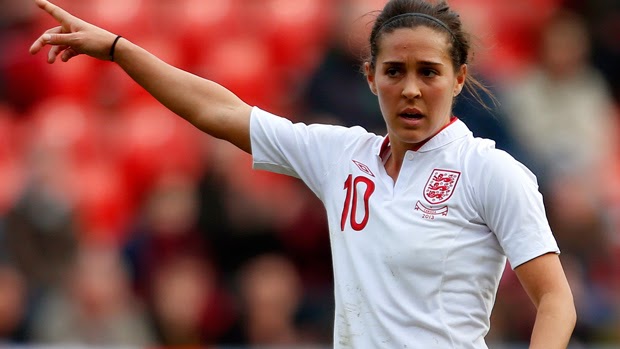 Before the break Liverpool were hit by a number of injuries to first-team players, the break perhaps coming at the perfect time to give these players time to recover. Katie Zelem has been given the all-clear following surgery on her collar bone while Kate Longhurst made her return during the Birmingham game. Martha Harris and Katrin Omarsdottir also missed games through injury while Matt Beard noted Corina Schroder and Fara Williams had been playing although not fully fit.

Liverpool have so far made one summer signing, with Denmark's Nina Pedersen joining after completing her education in the USA. Pedersen will bolster the reds impressive defence going into the second half of the season, joining up with a back four that has kept 6 clean sheets out of 8 appearances prior to the break.

The reds are also graced with talent throughout the ranks at the club, the day after the Birmingham draw saw the development squad put in a brilliant performance over Aston Villa - winning 4-1. While a week later the U17s won The FA Youth Cup in Milton Keynes with a 1-0 victory over Everton Ladies.

The youngsters performances have clearly been noted by the club, in the image below (posted by Lucy Bronze on twitter) alongside the familiar faces you can see a number of players from both teams. 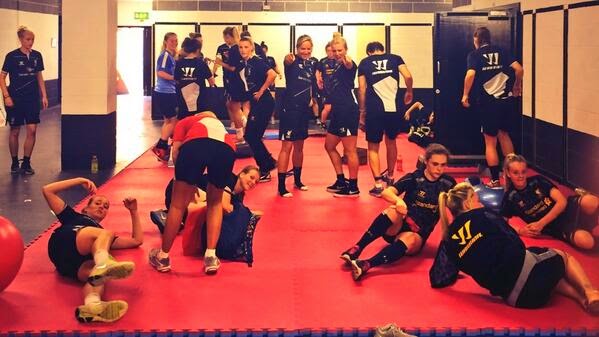 On the far right is creative midfielder Mollie Green who in April made the step up from the U17s to the development squad, scoring 3 goals in 6 appearances. To her right is Vicky Rumsey, a solid central midfielder who reads the game well and made 15 appearances for the development squad last season. The player in front of these two is Emilie Revitt, an attacking left-back who is also a Wales U19 international. The final youth player in the picture who has yet to feature for the first team is the U17s central defender Rachel Robinson, who is in the light blue training top on the left of the photo and has also already comfortably stepped up to the development squad alongside Green.

In 2013 the first team Liverpool faced following the mid-season break was also Arsenal Ladies, the reds unexpectedly falling to a 3-0 defeat with Jordan Nobbs in unstoppable form. For the first and only time since beginning this blog, the POTM was awarded to a player on the opposing team. 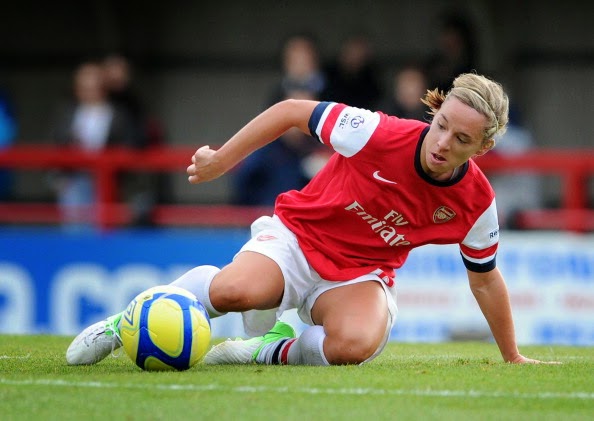 A back injury has prevented Nobbs from making an appearance yet this season for an Arsenal side that sit at the bottom of the league, luckily for them she has returned to full training and is likely to make her return in this game.

Arsenal are bottom of the table on just 1 point following 3 losses and a draw, despite winning The FA Cup on Sunday 1st June the gunners also find themselves without a manager coming into this game - having yet to replace Shelley Kerr who announced her resignation in May.

Last season seen two high scoring games between the two teams, Liverpool announcing their intent on challenging at the top of the league with an emphatic 4-0 victory at the Emirates only to have their title hopes dented by the aforementioned 3-0 defeat. 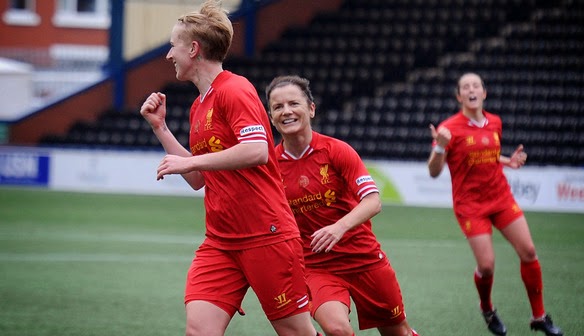 The game kicks off at 12:15pm on Sunday 29th June at Select Stadium, Widnes. The game is also live on BT Sport and is followed by Everton Ladies v Chelsea Ladies at 3:15pm at the same ground. Buying a ticket here will cover you for both games, while also entering into a prize draw to win a signed shirt by the Liverpool Ladies squad! As always those who have an Anfield season ticket are guaranteed free entry.

Finally I just want to say thank you to everyone who read and shared my 2014 Mid-Season Review, it has become the most read post on the blog with over 1,000 views! A quick recap on how the votes went from the first 9 games of the season:

Rachel Darbyshire started in goal for the reds with the solid centre-back pairing of captain Olivia Fuller and Rachel Robinson in front of her. Maz Pacheco and Beth Evans were at left-back and right-back, with Jessica Davenport up front, Mollie Green just behind her and the midfield four of Summer Smith, Tash Rothery, Blue Pendlebury and Kess Elmore. 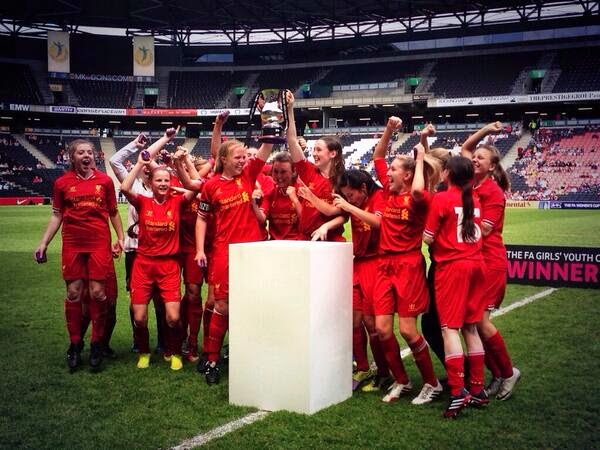 The first half was an even battle between the two strong youth sides, it was Everton who had the first chance of the game with their forward firing well over from the edge of the area.

Mollie Green returned to U17 action following a successful recent spell with the development squad, combining well with Jess Davenport in and around the 18-yard box to set up Tash Rothery for Liverpool's first chance of the game - the shot just off target.

Seconds later Davenport went on another mazy run into the box, her strike deflected out for a corner which was cleared. Liverpool continued to show brief spells of dominance in the first-half; a great through ball from Green was latched onto by Rothery but the blues defender managed to get back to clear.

From the clearance Everton themselves forged forward, Rachel Robinson blocking the shot but the blues continued to press forward - Summer Smith doing well to get back to cover and put the Everton attacker off her strike.

Before half-time Liverpool were presented with a number of opportunities, Rothery and Davenport both seeing strikes go wide before Maz Pacheco's free kick was headed away before it could reach Mollie Green. Green had the last chance of the first-half, somehow her goal bound strike was kept out by the Everton keeper.

Out for the second-half the reds picked up were they left off, Lizzie Earle - who replaced Beth Evans - and Pacheco pressing high up the pitch driving the team forward. Straight away winning a corner which was headed wide by Olivia Fuller, Blue Pendlebury also went close to opening the scoring but seen her effort only just go the wrong side of the post. 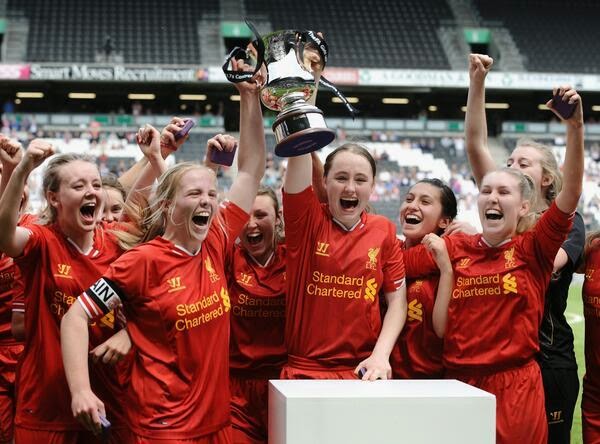 Everton did have a couple of chances early on, No1 Rachel Darbyshire punching away the corner and comfortably coming out to collect the return ball. The keeper was calm and composed when called upon throughout the 90 minutes - seconds before the final whistle expertly getting a hand to a long distance strike.

Kess Elmore had an excellent game in midfield, the quality of the crosses she was sending into the box was fantastic and she was a constant source of creativity for Liverpool.

Just minutes after teeing Pacheco up for a strike that was well saved, Elmore broke through the so far resilient blues defence and brilliantly finished past the keeper. The strike would prove to be the cup winning goal, Everton stepped up their game after going behind but Liverpool stayed strong as a team unit proving tough to break down.

Rachel Robinson was another stand out performer in the heart of defence, working well alongside Fuller to halt and frustrate the blues in their search for an equaliser.

Hayley Taylor also came on as a second-half substitute to add fresh legs to the side, helping the team to see out the win with ease.

POTM: When doing the vote each of Rachel Robinson, Maz Pacheco, Rachel Darbyshire and Kess Elmore were mentioned, with Elmore picking up the majority - the game-winning goal capping an impressive performance for the England youth international. 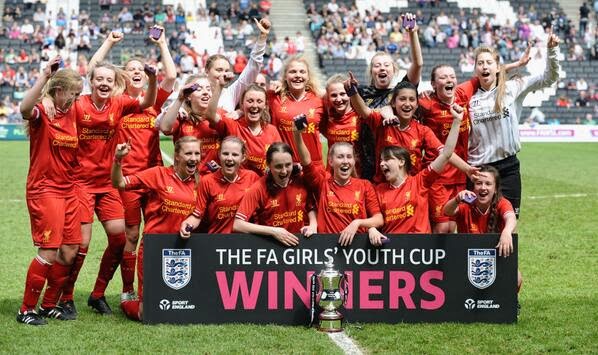 Overall Liverpool thoroughly deserved to lift the cup, beating Everton in style - particularly during the second-half - and displaying attractive attacking football with some great passing movement. Congratulations to the whole team and to coach Matty Campbell!

The future for Liverpool Ladies is very, very bright!

Heather @LFCladiesfans
Posted by Hi I'm Heather at 00:11 No comments: