WOMEN'S WORLD CUP ROUND OF 16

France convincingly beat Korea Republic 3-0 on Sunday afternoon to set up a quarter-final with Germany who had disposed of Sweden 4-1 the night before.

Korea were without Chelsea midfielder and PFA Player of the Year Ji So-Yun due to injury, as goals from Marie Laure Delie and Elodie Thomis put France 2-0 up within 10 minutes. Delie added a second shortly after half-time to secure the knock out victory for the Blues. 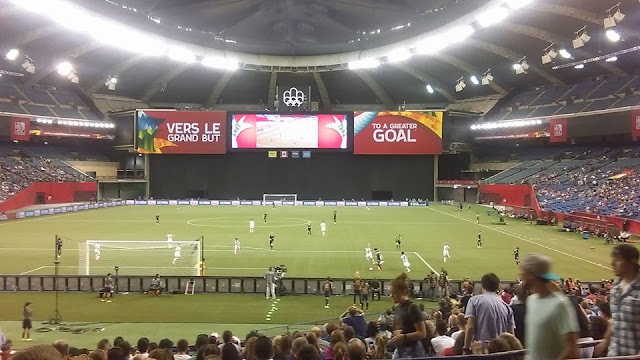 In the group stages France had beaten a very defensive England 1-0, before losing to Colombia and finishing top of Group F on goal difference thanks to a 5-0 win over Mexico.

The French went ahead on the 4th minute, a wonderful passing move slicing the Korean defence wide open and Marie Laure Delie finishing the move with a left footed finish into the bottom right corner of the goal.

France doubled their lead minutes later, hitting Korea on the counter attack; a Korean free kick played down the touchline was crossed into  the box for goalkeeper Sarah Bouhaddi to punch away and France were quick to break. Elodie Thomis cutting in from the right wing, playing a quick one-two at the edge of the box, skipping past the defender and finishing well across the keeper to make it 2-0.

Korea's attempts to get back into the game were thwarted by France, captain Wendie Renard strong at the back and Korea resulted to a rather theatrical dive from Lee Geummin inside the penalty area - correctly waved away by the referee - before Park Eunsun sent a speculative effort over the crossbar.

A lengthy break in play ensued when Korean keeper Kim Jungmi required extensive on-pitch treatment, when the match resumed Korea had perhaps their greatest chance to pull a goal back - Jeon Gaeul swinging a well-struck free kick towards the centre of Bouhaddi's goal, Bouhaddi spilled and, fortunately for France, Renard was quickest to react to the loose ball and clear.

Both teams had further chances to score from set pieces during the first half, Lee Eunmi was booked for her challenge on Eugenie Le Sommer at the edge of the 18-yard box. Louisa Necib's strike was cleared as far as Thomis who's ball back into the box was caught by Kim Jungmi.

Korea then had a free kick in a good position of their own, Jeon Gaeul once again standing over it however this time leaving it for her team mate Park Eunsun who sent the ball high and wide.

Shortly before half-time, Le Sommer received the ball well in the centre of the park, turning to pass out wide to Thomis on the right. Thomis making it all the way to the byline with only a last ditch sliding challenge from Lee Eunmi preventing her from making the cross. The resulting corner was played short and the eventual cross headed wide by Renard.

France begun the second half much the way they had the first, attacking at every given opportunity and passing the ball well. On the 47th minute they had their 3rd goal of the afternoon Delie scoring her second after brilliant work from Le Sommer on the left - the no.9 making a great run and cutting the ball back to the incoming Delie on the 6-yard box who made it 3-0.

Phillipe Bergeroo began to make his change with 20 minutes to play, likely casting one eye towards the quarter-final with Germany; each of Le Sommer, Abily and Delie replaced by Gaetane Thiney, Kheira Hamraoui and Kadidiatou Diani.

The Europeans seen the game out with ease, Bouhaddi quick off her line to clear Jeon Gaeul's through ball looking for Lee Geummin and also producing an excellent save - preventing Yoo Younga from scoring by stretching to tip the Korean substitute's shot away from the top corner.

Another Korea sub Park Heeyoung also attempted to test the French keeper with a free kick, sending her effort straight at Bouhaddi

In the dying seconds of the game it could of, and probably should have, been 4-0 to France. Thomis passing to Diani in the box, Diani into the path of Hamraoui who struck the ball first time and watched as it sailed over the bar.

FIFA Player of the Match - Amandine Henry
Posted by Hi I'm Heather at 04:49 No comments:

England progressed to the FIFA Women’s World Cup Round of 16 yesterday afternoon, beating Colombia 2-1 with first half goals from Karen Carney and Fara Williams.

Mark Sampson made a number of changes to his England side, including 3 changes to the back 4 – former captain Casey Stoney in for Laura Bassett at centre-back, partnering current captain Steph Houghton, Alex Scott returning to the starting line-up instead of Lucy Bronze at right-back and Claire Rafferty replaced by Alex Greenwood on the left. England no.1 Karen Bardsley retained her place in goal.

In midfield Fara Williams was once again stationed in front of the back 4; England vice-captain Jordan Nobbs making her World Cup debut alongside Jade Moore in centre midfield with Karen Carney starting at the tip of the midfield diamond behind a strike pairing of Toni Duggan and Fran Kirby. 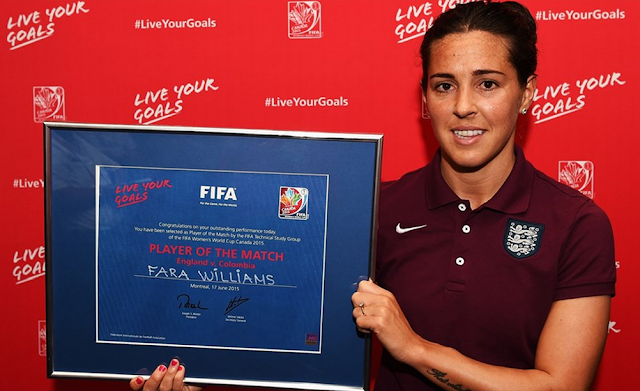 The Lionesses had been criticised in some quarters for takin a defensive stance against the French in their group opener, France subsequently lost to Colombia making England’s second group game against Mexico a must-win. After a nervy start in Moncton, England were greatly improved in the second half following the introduction of Karen Carney and Alex Greenwood. Carney influential in the opening goal scored by Fran Kirby before adding a second to guarantee the 3 points.

Due to 4 3rd place teams also qualifying, in addition to the top 2 from each group, England could possibly have afforded a draw in Montreal but their attacking intent was clear from the opening whistle.

Casey Stoney almost gave her country an early lead following a clever set piece; Greenwood playing the ball up the touchline towards Alex Scott who swung a cross in towards and past the back post, this was clipped back into the box to the head of Stoney but her header went narrowly over the crossbar.

Shortly after England did go ahead, another set piece this time Steph Houghton going for goal from a free kick, her strike towards the bottom left corner was punched away by the goalkeeper only as far as the incoming Karen Carney who put the ball in the back of the net. The Birmingham City captain scoring her second goal of the tournament in as many games.

England continued to press forward, defending well as a team when Colombia attempted to counter, with Karen Bardsley particularly effective in coming off her line and clear any balls into the box.

Fara Williams soon doubled England’s advantage from the penalty spot, the referee correcting awarding the spot kick after Carolina Arias handled Toni Duggan’s strike. Liverpool’s vice-captain stepped up to smash the ball past the keeper to make it 2-0 to England.

It could be argued that Colombia’s goalkeeper Sandra Sepulveda should have received a red card after taking out England substitute Jodie Taylor midway through her own half, the referee perhaps a little lenient and Sepulveda will now be unavailable to face the USA in their Round of 16 clash.

The keeper was involved again minutes later with another of England's substitutes, tipping Lianne Sanderson's shot onto the crossbar. This was Sanderson's second chance at opening her World Cup account, shortly after entering the action the Arsenal striker couldn't connect with her club team mate Jordan Nobbs' cross.

Colombia were largely reduced to trying their luck from range, Alex Scott working tirelessly up and down the flank whilst also covering well at the back - Yoreli Rincon with a sweetly struck strike inches wide of the post.

The Colombians did pull a goal back in stoppage time,  Lady Andrade chipping the ball over Karen Bardsley to make it a nervy final minute for England, who held on to secure the 3 points and qualify for the Round of 16 in Group F’s second place – second only to France on goal difference.

England will now face Norway in Ottawa on Monday 22nd June, kick off is 1pm over here and 6pm back home. A match report will be on this blog that evening.

Thanks for reading this report, it is the first of 5 I will be bringing you from my time here in Canada. Before the England game on Monday, France take on Korea Republic in Montreal on Sunday.

It was truly a great experience supporting England at my first World Cup game, being a Liverpool supporter I was absolutely made up to see Fara Williams score and named the official Player of the Match. 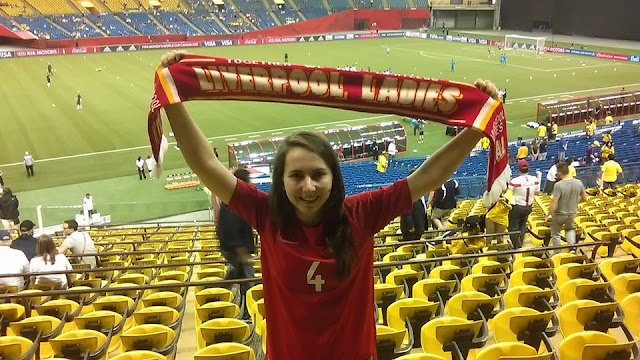