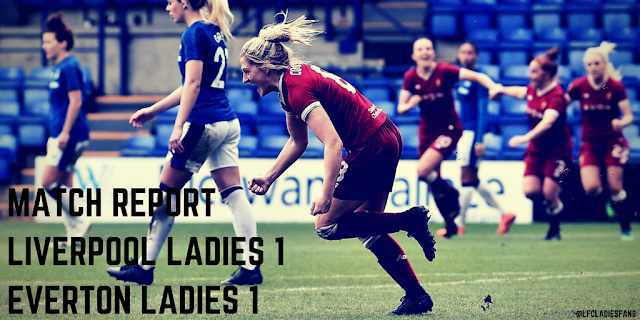 Hello followers of @LFCladiesfans, it's been a while since I wrote my own report on a game and the people (one person) have been asking for them. So here we go...

Liverpool Ladies will be disappointed to come away from Sunday's Merseyside derby with just one point and just one goal, Laura Coombs' second half strike cancelled out by Jodie Brett's equaliser.

The Reds had a second goal disallowed, Caroline Weir impressively beating Kirstie Levell with a left-footed set piece yet the referee appeared to pull it back for a foul in the build up.

To say Liverpool were on top from the opening whistle would be an understatement, they restricted their visitors to just two clear cut chances. First Chloe Kelly heading a cross from Chantelle Boye-Hlorkah over the crossbar and then former Reds midfielder Mollie Green also firing over from range.

Despite the lack of action the Reds defence remained alert, Satara Murray on hand to steer Dan Turner away from goal early on and Siobhan Chamberlain swiftly collecting a deflected pass that Kelly attempted to chase.

Liverpool were eye-catching going forward, in the first half doing everything but putting the ball in the back of the net. The superb Alex Greenwood excelling in a more advanced attacking role, supporting Bethany England up front and being instrumental as the Reds pushed and probed the Blues back line.

Greenwood had the first chance of the game, the ball falling to her at wide of the box and her strike whizzing past the post from a tight angle.

Scotland international Caroline Weir also produced arguably one of her best performances of the season, threatening on more than one occasion to provide the 1,446 supporters in attendance with one of her specials. One strike inches wide and another well-held by Levell.

The Reds visibly grew with confidence throughout the first half with the crowd willing them on.

Greenwood won a corner that bobbled around in the box before Weir struck a stinging effort at goal. The strike on target yet deflected out for another set piece that saw Greenwood shoot wide.

Before the break Liverpool hit the woodwork twice, Bethany England the first to do so after being put through by Weir then captain Gemma Bonner watching as Levell pushed her on-target header onto the post.

Barely a minute after the restart however the Reds were on the front foot, Everton's defence initially clearing but the magnificent Coombs arriving to drive the ball home from just inside the area.

Then it was almost two, Martha Harris and Greenwood combining to tee up Weir - her shot ending up on the roof of the net.

Shortly after Weir's free kick wound up in the back of the net, the Reds celebrating before the referee ruled it out for an alleged foul in the build up.

From here it Everton began to threaten, enjoying a series of passes and going close first through a set piece that was headed clear by Harris.

The Blues got their equaliser following a corner, a goal mouth scramble seeing Brett poke the ball over the line.

Niamh Charles made a welcome return from injury and Ali Johnson also came from the bench as Liverpool looked to edge themselves back ahead. Both substitutes impacting immediately on the goal, Charles a second too late to meet a cross from Greenwood at the back post and having a strike from outside the box saved by Levell.

For Johnson her first touch forced an immense block from Gabby George - what seemed like a sure game winner closed down just yards from goal. Minutes later Johnson also ended on the end of a ball in from Greenwood - tapping it across the face of goal and out for a goal kick.

Liverpool continued to throw everything they had at the Blues - Charles even hitting the post in the dying seconds to make it a hat trick of chances striking the woodwork - but were ultimately unable to net a winner.

The Reds will face Manchester City and Chelsea at home in the run in to the end of the season, with an away trip to Reading on 12th May.

As a side note, I'm really proud to be working with the club on social and digital media - one reason for the decrease in content on this page and across the social media channels. I'm still the biggest Reds supporter and love every minute of following, supporting and working with this team. Up the Reds!
Posted by Hi I'm Heather at 21:21 No comments: