After going a goal down in the first half the young Reds fought back with Cassia Pike impressively converting Lizzie Earle's corner in the 62nd minute.
A string of fine saves from the Sunderland goalkeeper denied Liverpool the chance to take the lead however and the hosts struck the killer blow fifteen minutes from time to take all three points.
Before going a goal down Liverpool were defending well, Lucy Roberts a stand out and clearing a dangerous cross out for a corner that was headed over the crossbar. Then Roberts twice blocked efforts in from outside the area in quick succession - the second allowing the Reds to counter yet Pike was stopped at the opposite end.
In the initial stages of the game Liverpool's chances were coming down the right through Simran Jhamat and Lauren Thomas.
Jhamat performing a fine turn on the halfway line to race forward, her cross was intercepted by the 'keeper and Thomas swung in a ball that was attacked by Pike and Annabel Blanchard - eventually falling to Bo Kearns who saw her stinging drive blocked.
After Sunderland took the lead - a free kick eluding everyone in the box to sail into the top corner - the Reds had opportunities to level the score before half time.
Earle's pressing earned her a shot on target that fizzed wide of the post, while good work from Jhamat out wide carved out a chance for Blanchard who was denied at close range by the 'keeper.
Liverpool came out fighting in the second half; Earle winning possession early on and her cross intended for Blanchard headed clear by the centre half, then Naomi Heartly's ball out of defence reached Pike whose cross skimmed the head of Jhamat.
The introduction of Levi Rathburn and Paige Cole injected some fresh legs into the side, Rathburn on the pitch a matter of minutes before unleashing her first shot of the game from distance - a good strike going inches wide.
Shortly after the hour mark Liverpool scored the equaliser they deserved as Pike arrived at the back post to volley home Earle's delivery from a corner.
And only for a string of great saves from the Black Cats goalkeeper the Reds would have gone ahead; Rathburn's shot parried, Cole's tipped over the crossbar and Blanchard again denied after being slipped through by Rathburn.
With fifteen minutes to play the hosts regained their lead, this time staunchly defending it to hold onto the three points on the opening day of the season.
LIVERPOOL LADIES: Carberry, Thomas, Heartly, Roberts, Boydell (Cole), Parry (Willis), Kearns (Rathburn), Earle (C), Jhamat, Pike, Blanchard
Posted by Hi I'm Heather at 22:35 No comments: 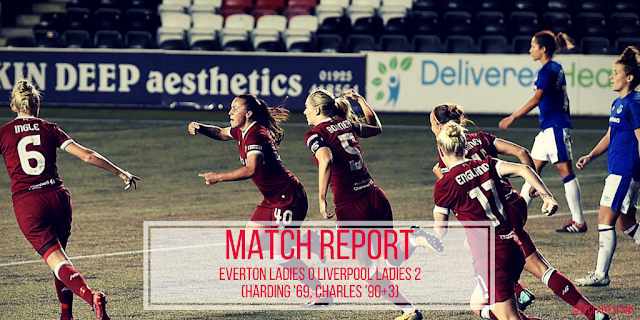 Perseverance was key for Liverpool Ladies on Friday night as they defeated Everton Ladies 2-0 in the opening game of the 2017-18 FA Women's Super League season.

Natasha Harding opened the scoring in the 69th minute after Alex Greenwood's set piece caused chaos in the Everton area, while Niamh Charles scored her first senior goal for the club in injury time to seal the three points.

On-loan forward Bethany England made her debut leading the line for the Reds, supported by Harding, Jess Clarke, Caroline Weir and Laura Coombs.

Satara Murray made a welcome return to the back four alongside Gemma Bonner, Casey Stoney and Alex Greenwood; with Sophie Ingle ahead of them and Siobhan Chamberlain in goal.

Liverpool dominated their Merseyside rivals from the opening whistle, showing glimpses early on of the attacking flair that made them a threat in the Spring Series.

Coombs was in the thick of the action throughout, proving a handful and racing box-to-box. Early in the half the Reds number eight chased a long ball from England only for the defence to scramble it away at the edge of the box.

Despite playing up front England was also dropping deep, showing great vision just ten minutes in to play a pass forward that was flicked on by Harding and picked up by Weir; the Scotland international smashing the ball at goal and seeing Everton goalkeeper Lizzie Durack tip her effort over the crossbar.

A stand out player in the aforementioned Spring Series, Greenwood was providing a great outlet down the left wing for Liverpool linking up with Harding ahead of her and allowing the Reds to consistently push in from the left.

England had Liverpool's first chance heading Clarke's cross the wrong side of the post and fifteen minutes in seen another header land in the hands of Durack. The Havard graduate was quick to redistribute possession for the Blues leading to a chance for new signing Courtney Sweetman-Kirk, who must have thought she'd netted on her debut only for Stoney to waltz in and clear the strike off the line.

Everton were the home side in Widnes on the evening and grew into the game, new captain Dan Turner swinging in a threatening cross that Jodie Brett attacked yet was unable to connect with while former Liverpool forward Claudia Walker was lively throughout.

As the half drew on the Reds were awarded two free kicks in quick succession in similar areas, Coombs sending the first wide and Weir's dipping a second too late to go over the crossbar.

Everton's Gabby George also flashed an effort wide following a set piece while at the other end England tapped the ball to Weir under pressure, Weir finding Harding who curled a shot in on goal that was collected by Durack.

The biggest chance of the first half came ten minutes before the break as Weir curled in a free kick from near the half way line, Clarke won the header which crashed off the bar and Durack somehow managed to keep England's diving header from crossing the line.

Out for the second half and the Reds continued to be patient as they probed for the opening goal, Greenwood cutting in from the left to cross to England who couldn't direct her header on target and Coombs playing a one-two with Weir before firing a strike from distance over the bar.

England could count herself unlucky not to be on the scoresheet as she went close again after getting on the end of another Greenwood cross; Greenwood also almost setting up Harding - whose shot was caught by Durack - and Weir who couldn't get on the end of yet another cross in from the left.

Eventually the chances would turn into goals, it was of course Greenwood who sent in the free kick that was bandied around the Everton box - Bonner's effort cleared off the line by Turner to land at the feet of Harding who fired the ball into the back of the net. Fan-favourite Harding celebrated passionately pointing at her shirt to the erupting Liverpool supporters in the crowd.

Charles first watching as Durack punched her shot away after going one-on-one with the 'keeper who also got to Hodson's strike in injury time, however Charles arrived to slot home the rebound and secure the three points for Liverpool.

PLAYER OF THE MATCH [as voted for by followers of @LFCladiesfans]

The Reds fielded a Development Squad side that contained nine graduates from the club’s Regional Talent Centre; while the first team were also in attendance, partaking in a meet and greet with supporters prior to kick off. 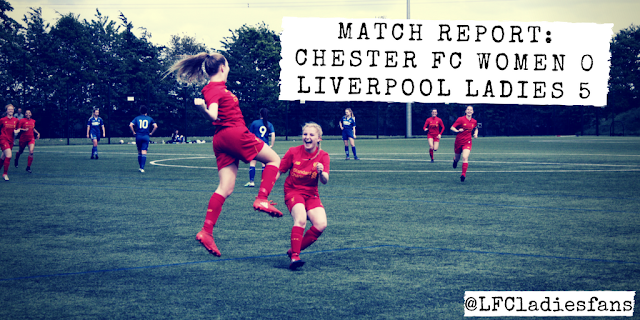 The tie was perfectly poised at the break as Liverpool took in a 1-0 lead courtesy of a Chester own goal, yet goals in the second half by Aimee Everett (2), Courney Willis and Bo Kearns secured the win.
For the opening twenty minutes of the first half there was little in the way of clear cut opportunities for either side, as both defences were quick to smother any danger.
Paige Cole did well under pressure to keep possession for Liverpool in the early stages, this almost leading to Lizzie Earle slipping Aimee Everett through on goal only for Chester goalkeeper Emily Walker to get there first.
At the opposite end of the pitch Chester’s front line were also looking to breach the Reds defence. First ‘keeper Emily Ramsey was quick of her line to stop an attack in its tracks and then Lucy Roberts and Cole combined to spurn another.
Liverpool full-backs Cole and Meg Boydell were first to register shots on target; Cole making a fine run to cut in from the left yet her effort was held by Walker and Boydell mirroring the chance only for her strike to be blocked by a defender.
The Reds began to edge further and further forward as Willis teed up Kearns whose volley was pushed around the post, then Kearns nearly found Walker but the defence quickly recovered to scramble the ball away.
With under ten minutes to go until half-time Liverpool took the lead, Willis swinging in a corner that was touched over the line by a Chester player.
Buoyed by going ahead Liverpool almost doubled the lead immediately from the restart, Earle racing in on goal and denied one-on-one by Walker – who minutes later also intercepted Earle’s pass intended for Simran Jhamat.
Liverpool dominated proceedings in the second half, threatening from the opening whistle as good build up play between Boydell, Jhamat and Kearns led to Kearns being flagged for offside.
Five minutes into the half and seconds after being denied by a good save, Everett doubled the lead by slotting the ball into the bottom right corner.
Hungry for more goals Kearns put Jhamat through in the box and Jhamat, who scored on her Reds debut in the friendly against Fylde, selflessly squared the ball to Everett which the defence managed to clear.
Willis extended the lead to 3-0 with 56 minutes played, firing a ferocious left-footed effort in from a tight angle.
As the game reached the closing stages both Earle and Kearns rattled the crossbar, Boydell shot narrowly over and Millie Fitzpatrick headed inches wide.
There would be time for two more goals, former u16 captain Kearns capping a good performance by providing an assist to Everett for the fourth and then scoring herself in the 89th minute - eluding the ‘keeper with a lovely strike from 25-yards for the game to finish 5-0.
Liverpool Ladies: Ramsey, Boydell, Heartly, Roberts, Cole, Parry, Kearns, Earle ©, Jhamat, Willis, Everett (Fitzpatrick)
Posted by Hi I'm Heather at 19:21 No comments: