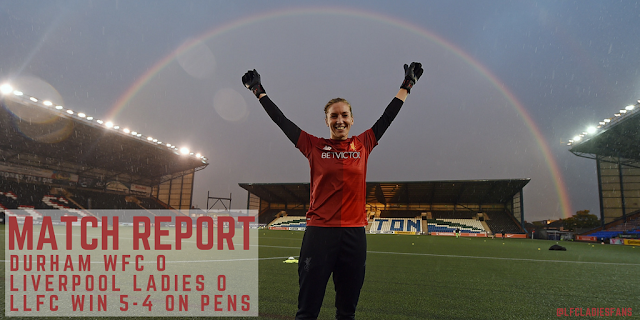 A defensive display from WSL2 outfit Durham Women prevented Liverpool Ladies from returning to Merseyside with all three points on Sunday afternoon.

The Reds were held to a goalless draw by the Wildcats however won 5-4 on penalties to earn a bonus point in the Continental Cup.

Scott Rogers made two changes to the team that beat Sunderland last weekend, Ashley Hodson and Laura Coombs in for Jess Clarke and Bethany England.

Throughout the game Liverpool dominated in possession yet were turned back at every turn by a Durham side set up to defend.

In the opening ten minutes alone Hodson’s shot was parried by Durham goalkeeper Helen Alderson to Laura Coombs who fired over and Gemma Bonner directed a Alex Greenwood delivery wide of the post.

Greenwood’s form in 2017 has been mightily impressive and she continually looked to be the difference today, a constant showing on the left.

The England international waltzed past a couple of Durham shirts to cut in and thread a through ball for Tash Harding to chase, Alderson just beating the forward to it.

With Liverpool looking more and more likely to break the deadlock, Coombs sprayed a pass wide to Charles that was sent in first time towards Hodson yet Alderson - who was about to have a very busy afternoon - was off her line to collect.

Alderson was being kept busy at the other end, while Siobhan Chamberlain was to initially have a quiet afternoon. The Reds shot stopper first called into action in the 11th minute to scoop up a loose ball that got away from Hepple, yet otherwise seeing little of the play.

Part of this was down to the superb Satara Murray at right back, when Durham ventured forward they appeared to head down the right flank. Murray showing her strength on a couple of occasions to show the attacker wide and win back the ball.

As the half drew on it was Bonner that went closest to breaking the deadlock, a glancing header on the stroke of half time going wide following a set piece.

Before that the Reds had had a slew of chances; Caroline Weir trying her luck from 40-yards, Alderson again beating Hodson to a Charles cross, Harding denied by the ‘keeper after good work by Greenwood and Sophie Ingle and a Harding strike deflected out for a corner after the forward was set up by Hodson.

Liverpool’s lack of luck in front of goal continued into the second half as Durham’s defence were happy to sit back and frustrate.

With just over half an hour to play Greenwood’s fizzing strike from a tight angle bounced off the crossbar.

As Liverpool looked to shake things up in order to get the goal their performance deserved England replaced Hodson and Jess Clarke took to the pitch in place of Murray.

Unfortunately for the Reds Clarke picked up an injury shortly after coming on and Liverpool sent on Ali Johnson.

Before the referee blew for full time Liverpool threw all they could into attack, Greenwood basically playing left forward and Bonner also high up the pitch - only Casey Stoney remained in the Reds half keeping Chamberlain company.

A Greenwood cross with 15 minutes to play was cut back by England yet shot wide of the target by Coombs.

Bonner also looked to tee up Charles in the closing stages but the busy Alderson smothered the strike, leaving the game to finish goalless and requiring penalties to be taken to decide which side took home the bonus point.

A tense penalty shoot out followed with sixteen takers in total. Durham’s early lead cancelled out as Coombs, England, Harding and Stoney each netted from the spot while the previously uninvolved Chamberlain impressed with a trio of saves.

Poised at 4-4 after Durham also sent one over the crossbar, Weir stepped up to convert the decisive spot kick and ensure the Reds returned with two points.