Liverpool exited the FA Cup this evening with a fighting performance against Arsenal Ladies. There are lots of positives to take from the defeat, the team is really starting to settle as a group and last season who would have thought we would push Arsenal all the way in an FA Cup Semi Final!
Liverpool bossed the midfield from the off. Katrin and Rolser in particular were impressive, Katrin nearly opened the scoring with her header going slightly wide of the post. Natasha Dowie was also a stand out performer, holding up play brilliantly in and around the 18 yard box. A great header on the stroke of half time from Dowie gave the Ladies a morale boost and it was a shame there wasn’t longer left to play in the first half.
Liverpool started brightly in the second half and were unlucky to be caught on the break for the second Arsenal goal. Rolser spotted Byrne off her line and tried an audacious chip from 20 yards out that unfortunately sailed over the crossbar. Also unlucky in the second half was Amanda DaCosta - full of energy and seemingly all over the pitch – who went through on goal only to be thwarted by the Arsenal defence. Dowie almost snatched a second equalizer for Liverpool in injury time following a great ball into the box from Whitney Engen however it wasn’t to be.
There was a 2000 strong crowd on The Kop, bit of a strange crowd – a lot of kids meant Arsenal players were getting booed. Booing opposition players is something I don’t condone at football games, the energy is best spent getting behind your own team! An amusing fight also broke out after someone threw a bottle onto the pitch when Arsenal scored their first goal.
Other than that it was great to see the ladies play at Anfield in front of a large crowd. Fantastic to see Anfield traditions upheld, George Sephton being the ever-present Voice of Anfield, the playing of You’ll  Never Walk Alone as the teams walked out and a favourite of mine – clapping the opposing keeper as they run towards the Kop goal. Arsenal are a well-oiled machine and I wish them the best of luck in next month’s final.

Next up for the reds we have Doncaster Belles in the Continental Cup. The game is due to be played Saturday 4th May at Halton Stadium, Widnes and will kick off at 7:15pm. Ticket pricing is the same as this evenings game (£4 adults, £1 under 16’s) and tickets can be purchased on the day at the turnstiles.

In other news today the FA has announced the 18 teams who will play in the restructured WSL next season. Liverpool have retained their WSL status and will play in the top tier of the competition. The two big changes for current WSL teams, Doncaster Belles will be in the second tier of the league having being replaced by Manchester City Ladies and Lincoln Ladies will be rebranded as Notts County. Highly disappointing for both sets of supporters and for women’s football.

Tomorrow evening Liverpool Ladies take on Arsenal in the FA Cup  Semi Final, looking to reach the final for the first time ever. Anfield will host the tie as the FA's choice of a 'neutral' venue. Tickets on the night will be £5 for adults, £2.50 concessions with the seating being unreserved on The Kop. The game is not televised so if you're in Liverpool get yourself down to support the girls and if you are unable to for whatever reason the official twitter will be live tweeting the game here. I will try my best to update my twitter whilst there however I don't hold much faith with the wifi at Anfield!

Our opposition Arsenal are the team to beat in Women's football and are by far the biggest test we could face on route to a final. Since their foundation in 1987 they have won the FA Cup a record 11 times and for the past two season have been Women's Super League Champions. Their team boasts a number of established internationals including Women's Player of the Year Steph Houghton. Houghton is a remarkable attacking left back who you may remember from scoring 3 goals for Great Britain in last years Olympics. Striker Kelly Smith has not featured for Arsenal yet this season and so is a doubt to appear here. Other players to watch out for are attacking midfielder Jordan Nobbs and Rachel Yankey.

To reach the semi-final Arsenal beat Birmingham 6-0 however have lost both games since, both to Wolfsburg whilst crashing out of the  Champions League. On the other hand Liverpool go into the clash unbeaten in all competitions despite a near-complete squad overhaul during the winter the team have won all but one of their games together. That game being the 1-1 at home to Everton in the Continental Cup. Liverpool acquired their place in the semi-final with two away wins, convincingly beating Aston Villa 5-0 and then a 2-1 win over current Premier League Champions Sunderland in the quarters. Despite Liverpool Ladies never reaching an  FA Cup Final before there is experience within the team, Fara Williams, Becky Easton and Natasha Dowie all won the cup while they were with Everton, Dowie scoring a great goal in the final.

To play at Anfield will be brilliant for players and supporters alike and it promises to be a great occasion!

This Sunday the ladies in red travel to Lincoln to play in the first game of the WSL season.

Read a preview to the game here.

I answered a few great questions on Lincoln Ladies supporter Adam's preview blog which you can find below, and was supposed to do my own but I think his covers all corners!


AB: Liverpool have played three games so far and have won two and drawn one. How do you rate the performance of the side so far in this early stage of the season?

HC: Liverpool are in good form going into the season, a convincing 5-0 win at Aston Villa and a 2-1 victory away at Sunderland. However the game we drew at home against Everton is probably a more realistic view of where we are at the moment. We started well against Everton and if it were not for a couple of great saves from Rachel Brown we could have been 2-0 up going in at half time! We were a bit unlucky with the dubious decision that led to their goal and without that I think we could have gone on and got a hard earned victory.


AB: You have been by far the busiest club in the transfer market over the winter months. Which signing has most excited the fans?

HC: To be honest all the new signings have stirred excitement amongst supporters. They are a real statement of intent from the club alongside the integrating of the Women’s team into a bigger part of Liverpool Football Club as a whole.
The signings from Everton are huge for us, in particular Fara Williams who is a proven goal scoring midfielder in the WSL. Williams got a hat trick in her competitive debut for us which is great to see.
Whitney Engen is the biggest signing for us in my opinion; a fantastic centre back who I believe will be first choice for the USA in the coming years. If Engen and Gemma Bonner can form a successful partnership in the heart of our defence it will bring the stability that we have craved in the last couple of seasons.


AB: How has the move to a new stadium gone down with the supporters? The ground at Widnes is certainly a huge improvement from last season and you had a very good crowd in for the Everton match.


HC:Halton Stadium is a vast improvement from last season, a lot more accessible and appealing than being in Skelmersdale! The buzz around the new signings and the media coverage we seem to be getting should mean that the numbers through the gate will go up. Given that the game against Everton last month had such a good crowd despite the terrible weather conditions is a great indicator for the season ahead.


AB:Where do you expect Liverpool to finish this season in the league? And do you think there is added pressure on the club given all the signings made in the winter?


HC: Matt Beard has said the minimum target this season is a top four finish and while I feel this is a more realistic expectation if the team can settle quickly and get a good run of results together to get some momentum going I see no reason why we can’t at least challenge at the top of the table. Not saying I expect us to be winning the league straight away but to be up there and challenging for honours would be great for both the club and supporters after the last couple of seasons.
The pressure is on the players to perform especially with the aforementioned media coverage, it kind of feels as though everyone is watching us to see what happens. Hopefully that pressure is something the girls can thrive on.

AB:And finally could we have a prediction for this weekend’s game from you please

HC: The fixture has given us a lot of goals over the last two seasons however with both teams having strengthened at the back – Karen Bardsley being a great signing for you and our new centre back pairing of Engen and Bonner I can see this game being a tighter affair. I’m going to sit on the fence and go for a 1-1 draw!
Posted by Hi I'm Heather at 22:09 No comments:

Tuesday nights ESPN WSL Preview featured interviews with Liverpool Ladies manager Matt Beard and new signings from our rivals Everton, Fara Williams and Natasha Dowie. For those who were unable to watch the show I have transcribed the interviews below!

Matt Beard "My job was to assess the current squad when I took over and look at replacing and starting all over again. We felt we needed that blend of domestic players as well as 1 or 2 internationals from abroad to give us that balance and I think we've managed to do that."

Matt on aspirations for the season "To be in the top half of the table - that's the minimum target we've got. I think we've got a squad that can beat anyone on its day but top half finish is a target to start off with and then anything above that will be a bonus."

Natasha Dowie "We had some great years at Everton, I was there for 4 years and won a lot of trophies with them. I felt like I needed a fresh lease of life and I've worked with Matt Beard before at Charlton. I heard of what he was planning on doing here at Liverpool and when I saw the talented players he was going to bring in from other clubs in the WSL and overseas I thought it was a team that was looking to achieve great things."

Natasha on team bonding "It just feels natural, we've been training every day it's been such a buzz and the girls have gelled so well. It's really exciting and we're all having such a great time here."

Natasha on aspirations for the season "I think deep down we've got the quality in this team, this squad to maybe make history here at Liverpool and I believe there can be special things this season for Liverpool Ladies."

Fara Williams "We've got players with international experience so they bring that kind of confidence that English players don't have. We have to hide what we want and what's wrong with putting it out there and saying we're going to go for it - that's what some of the foreign players have bought." 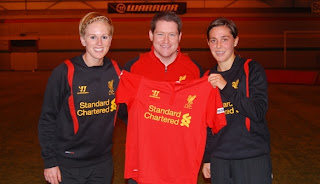