Lucy Bronze: Player of the Season 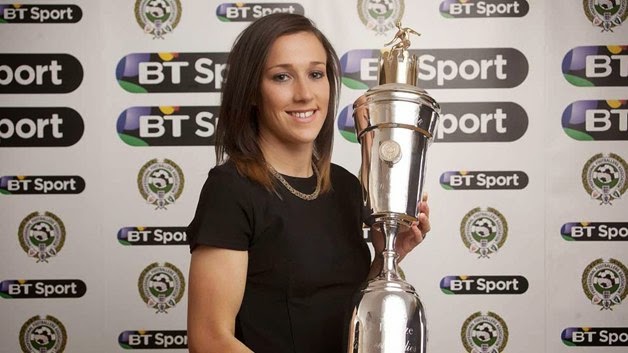 At the end of 2013 Lucy Bronze picked up the Liverpool players' Player of the Season award and 4 months later the PFA Player of the Year, her performances for Liverpool since the move from Everton 12 months earlier consistently good and earning the recognition from her fellow professionals.

In 2013, Lucy has continued to display all of the qualities that seen her pick up the awards for her displays in a red shirt.

Beginning the season at centre-back alongside captain Gemma Bonner, Bronze still showed the attacking side of her game - it was her pinpoint pass that set up Natasha Dowie for the opening goal of the league campaign against Manchester City.

Bronze had filled in at centre-back twice in the previous year, and has also made the centre-back starting spot her own at international level - beating established England players such as former captain Casey Stoney into Mark Sampson's team. Lucy featured in all but one of England's World Cup qualifiers, only missing the Wales game through suspension.

During the 0-0 draw against Notts County in the first-half of the season, Matt Beard switched Bronze back out to right-back - immediately giving the reds the advantage of her attacking flair on the right side of the pitch. Staying at right-back until the final game of the year, Lucy formed a partnership with Gemma Davison who was also deployed mainly on the right and most of Liverpool's attack came from that side of the field.

Bronze picked up many Player of the Match awards during the course of the season (a quarter of all games) and it could have been many, many more. Supporters appreciate her hard work, her consistency and her never-say-die attitude..

A game in which Lucy perhaps played her best game for Liverpool this season was the home win over Chelsea Ladies, attacking with intent and defending well against a Chelsea side that boasts one of the best squads in the league. A powerhouse of a performance was capped with a goal after an excellent run and a quick exchange with Davison on the edge of the area ended in Bronze smashing the ball past the keeper for her first goal of the season.

What Liverpool supporters admire most in a player is the passion and determination when wearing the Liverbird upon their chest, Lucy Bronze is a player who has this in abundance - perfectly displayed by her performance in Liverpool's Champions League exit, her head never dropping as she put all her energy into attempting to drive the team on.

Liverpool Football Club are lucky to have a player of Bronze's calibre amongst their ranks.

Prior to the game in Sweden, Lucy also took the time out to answer a few questions for this blog;

Q : Congratulations, Lucy! You are @LFCladiesfans Player of the Season, how does it feel to add this accolade to your PFA Player of the Year award?

Lucy Bronze : Brilliant, I think as a defender individual awards always mean a little more and it's amazing to have had players support last year and the fans support this year. The manager's point of view means a lot, but you always want to impress players and fans! 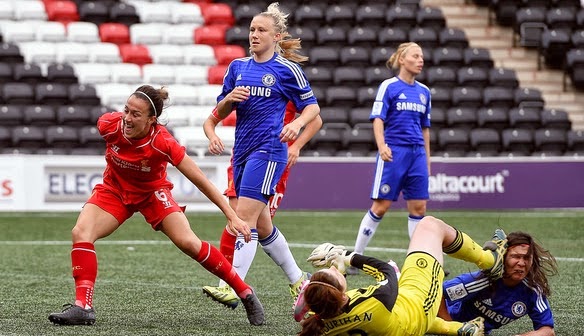 Q : Having started the season at centre-back, how did the move back out to right-back come about? Which position do you prefer?

Lucy Bronze : Initially the move to centre-half was because of losing Whitney Engen at the end of last year, this left an obvious hole in the back line. Matt put me back at right-back mid-season to give me more chance to attack and more freedom to join in knowing I'd get back to defend.

I always say I prefer right-back. Not that I dislike centre-back - because I love it. Just at full-back I love getting myself involved higher up the pitch.

Q : Liverpool's defence has tightened considerably this year, what do you think has been the main difference in this?

Lucy Bronze : Libby Stout! I don't think people quite yet realise how good she is. We all know training with her every day, but this girl is quality. Also we wanted to tighten up defensively after last year when we focussed so much on attack. I think our next step is to balance the defensive work of this year, with the attacking play of last year. Hopefully we'll get that balance next year - third times the charm!

Q : With Liverpool's injury crisis during the first-half of the season, how much of a factor did team spirit play in keeping you fighting for the title until the end? 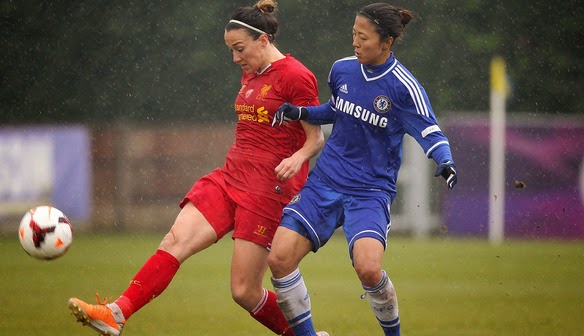 Lucy Bronze : I don't think teams outside of our team realise how much we actually were affected by injury this year. We literally had players playing in big games carrying knocks and injuries, purely because we didn't have anyone else - but I know for me it's taught me a lot. Not only had it been our team spirit but I think that's well known at Liverpool, that we have a good environment and we really all get along. A lot of players have had to take responsibility of the team this year and dig out individual performances to help the team - which is something we didn't have to do as much last year when everyone was fit and healthy and playing well.

Q : Talk us through your feelings between the final whistle in your game and the news filtering over of the full-time results in Manchester and Birmingham.

Lucy Bronze : Once the whistle had gone I just got myself into the crowd to see my family. I didn't know whether to get excited or not, they were excited for me. There were no real emotions for how any of us were feeling... disbelief/ excitement/ anxious/ nervous. Then someone shouted from inside and we all went mad. I think that's why so many players had so many different emotions, crying, laughing, screaming because it was so surreal.

Q : Finally, what have your personal highlights been from the 2014 season?

Lucy Bronze : I think we have had a lot of dramatic games this year, but my best best memories have come at the end of the season. Fara's winner against Birmingham was epic, then the Arsenal game to come back the way we did from 2-0 down and scoring last minute for a crucial point. Then the obvious last game of the season, I think against Bristol we played some really good football - we could have easily scored a couple in the first-half and then to top that great team performance off with the trophy at the end was quality.

Now hopefully we can take that last few games of form into our Champions League run and do ourselves and the fans proud!!
Posted by Hi I'm Heather at 22:57