LIVERPOOL LADIES extended their unbeaten run in the FA Women’s Super League on Saturday evening with a 1-0 win over bottom-placed side Doncaster Rovers Belles. 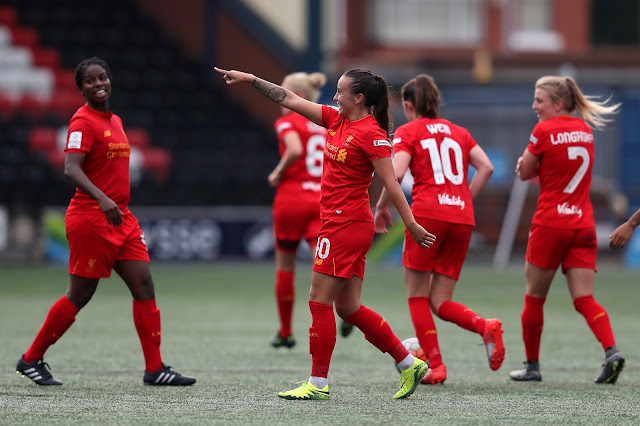 The plucky Belles have now played 9 league games without a win, yet have 3 games in hand over Sunderland who sit 6 points above them – and play the North East club on Thursday.

The Reds made a blistering start to proceedings in Widnes, the only change to the 11 that featured in the last-minute Cup defeat to Birmingham seeing Emma Lundh come in for Katie Zelem; the no.9 slotting seamlessly into the attacking 3 alongside Natasha Harding and Shanice Van De Sanden.

Caroline Weir played just ahead of Laura Coombs and Kate Longhurst in the middle, with the latter providing cover for the back line of Satara Murray, Gemma Bonner, Sophie Ingle and Mandy Van Den Berg – Siobhan Chamberlain in goal.

For the opening 45 minutes in Widnes Liverpool threw everything at the Belles.

Every play building from the back with the first attack forged when Van Den Berg intercepted a pass, finding Coombs who sprayed the ball wide to Harding.

Harding in turn picked out Weir, who looked to have stumbled and lost the ball yet recovered well to produce an impressive turn on the edge of the box however unfortunately fired her cross at goalkeeper Nicola Hobbs.

Hobbs was the star of the first half, twice denying the energetic Van De Sanden – first with her foot after the Dutch winger was set up by Lundh and then bravely off her line to stop Van De Sanden at point blank range.

Liverpool also peppered the Doncaster goal with shots from a series of corners midway through the half; Hobbs tipping an Ingle header over the crossbar, Harding prodding the ball from close range yet seeing it deflected wide and Van De Sanden firing over.

The corners were punctured by a first Doncaster chance of the game, this falling to former Liverpool and two-time title winning midfielder Katrin Omarsdottir, playing up front here for the Belles, who sent a left footed hit wide of the post.

Following this it was back to the other end of the pitch. Liverpool changing tactics on a corner and having Weir and Coombs play a quick one-two for Weir to cut in and shoot narrowly over from the corner of the area.

Before the half time whistle Omarsdottir went closest to breaking the deadlock, Liverpool initially looked to have cleared from the danger only for a sneaky through ball to worm its way back through the Reds defence.

Omarsdottir was quick to pounce yet Chamberlain was quicker to react, diving to push the ball clear and preserve her clean sheet.

With the final move of the half Harding received the ball inside the Doncaster box with her back to goal and closely marked by a defender; she held the ball well to allow for Lundh arriving only for the no.9’s effort to be blocked.

Barely two minutes into the second half and Liverpool broke the deadlock.

Harding finding herself in space 20 yards from goal and lifting a perfectly weighted shot across the face of goal and into the back of the net, the Welsh vice-captain has been a stand out for Liverpool in the second half of the season and the goal capped another good performance.

The Reds had plenty of opportunities to double the advantage, a fierce ball in from the right was parried away by Hobbs and the resulting corner met by the head of Murray but stopped from crossing the line a yard from goal.

Substitute Katie Zelem was unlucky to watch her set piece float inches wide while Doncaster themselves threatened from a free kick, Leandra Little rising highest to nod the ball into the safe hands of Chamberlain who held it well on the line.

Liverpool’s Murray was kept busy throughout by Omarsdottir on the right, shielding the ball out for a corner early in the second half and winning her battles with the Doncaster no.7.

One of the Reds biggest chances to score a second came when Murray read a Doncaster move superbly to come and steal the ball on the half way line, the midfielder given no chance and Murray having the time to look up and clip a placed pass into the path of Lundh – her shot blocked by a defender.

Into the final minutes of the game Harding came agonisingly close to converting Zelem’s cross and a Doncaster ball that flashed across the face of goal was again held well by Chamberlain.

Liverpool have now gone 7 games unbeaten in the league – keeping an impressive 5 clean sheets, conceding only twice and scoring 10. The Reds have just 4 games to play in their 2016 FAWSL campaign and sit a point from 4th.

Scott Rogers’ side now go on the road with away ties at Reading, Birmingham and Doncaster, before a final home game against Arsenal on Sunday, November 6th.

PLAYER OF THE MATCH: Satara Murray/ Natasha Harding
Posted by Hi I'm Heather at 23:38 No comments:

Birmingham City Ladies progressed to the semi finals of the Continental Cup at the expense of Liverpool Ladies on Sunday afternoon.

It took over 120 minutes for a goal to be scored, Coral-Jade Haines coming off the bench and breaking Liverpool hearts in added time of extra time as she prodded the winner over the line.

The Reds couldn't be faulted for their efforts in what was an evenly matched cup tie; Laura Coombs had struck the post in the first half while Tash Harding and Emma Lundh also went close.

The opening five minutes saw both sides tentatively passing the ball about, neither taking a risk and appearing cautious in possession.

Van Den Berg has seen a recall to the starting lineup in recent weeks at due to left back Alex Greenwood facing a spell on the sidelines and the game sparked into life when the Dutch captain intercepted a pass.

Finding space now at the other end of the field Birmingham forward Kirsty Linnett sent a dangerous ball into the Liverpool area, this was gathered by Chamberlain.

Chamberlain was on alert again moments later, the home side pressing back forwards and earning a corner. This floated to the edge of the box and was headed tamely towards the Reds 'keeper.

On either wing Van De Sanden and Harding were the stand out performers for Liverpool, chasing every ball and applying pressure to the defence.

Harding chased one particular ball in the first half that seemed to be a lost cause, the Blues defender certainly believing so, yet the winger reached it on the touchline with lightning quick speed and swinging a cross in that connected with Weir, her low hit deflected wide.

From the resulting corner Harding herself attacked the ball at the back post, this effort was blocked

For large parts of the first half Liverpool were on top, yet ultimately unable to capitalise on the chances created.

Coombs went closest hitting the post from 25 yards out, while Harding from prevented from getting a shot in by a well-timed challenge after a pinpoint pass from Weir.

The Reds were quick out the blocks for the second half, Harding again closing in and clipping a shot that had new Blues 'keeper Ann Katrin Berger beat but somehow was kept out by Jess Carter.

However chances on the whole became sparse for both sides and it would be extra time before another meaningful opportunity.

Into 30 minutes of extra time with penalties looming, Birmingham piled on the pressure. A set piece glancing across the face of goal and Chamberlain at full stretch to keep Haines' hit from reaching the top corner.

At the midway stage Niamh Charles entered the action in place of Van De Sanden and the youngster made an immediate impact, impressively beating her marker to cut the ball back up the box towards Lundh - who had entered the fray for Coombs earlier.

Lundh arrived unmarked but could only watch as her low drive was blocked on the line.

Straight back up at the other end, Haines let a shot fly from outside the box that again had Chamberlain diving to keep out.

Not long after the assistant referee had held up the board to show one additional minute at the end of the 120, Haines finally broke the deadlock amidst a sea of bodies in the area to tap over the line from yards out.

Liverpool were out of the Cup with almost the last kick of the game and now face just  league games between now and the end of the campaign, with the aim surely being to move back into the top half of the table - the Reds currently sit 5th on 16 points, 4 behind Birmingham with a game in hand.

PLAYER OF THE MATCH: Natasha Harding