LIVERPOOL LADIES capped off a disappointing league campaign with a final day 4-2 defeat away at Bristol Academy.

The Reds had tied the score at 1-1 after going a goal down, but the home side raced back ahead – Natasha Dowie added a late consolation, converting a corner.

Elsewhere in the league Chelsea Ladies emphatically beat Sunderland 4-0 to claim their first league title and a 2-1 victory for Manchester City, in front of an impressive crowd of 3,180, placed them second to secure Champions League football in 2016/17. 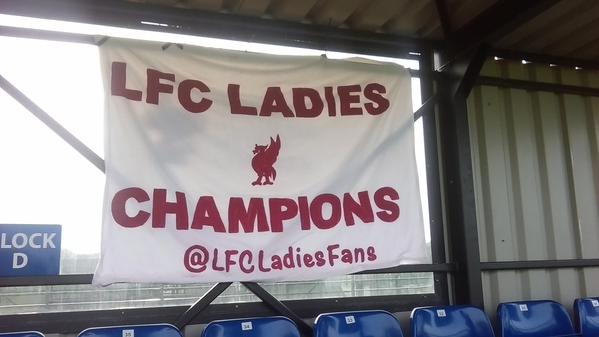 Goalkeeper Libby Stout had been injured during the closing stages of the 4-0 defeat to Chelsea Ladies last weekend and did not travel with the team – Danielle Gibbons making her return between the posts after having brain surgery in the summer.


Bristol took an early lead, Anghared James battling her way through the defence to cross low to Caroline Weir and the Scot turning well in the box from both Bonner and Harris to finish past Gibbons

Good pressure in and around the box by Liverpool would eventually pay off – first Harris’ throw-in landed at the feet of Dowie but the no.9 couldn’t turn against the tight marking and then Ryland, who has enjoyed a good run of form of late despite results, was also influential in the Reds best passing move of perhaps the entire 90 minutes.

Winning the ball in midfield, passing to Staniforth who turned to play in Omarsdottir. She carried it forward past a number of Bristol shirts before passing back wide to Ryland who still found herself in space however the cross was headed away.

The equaliser came as a result of Liverpool just getting the ball forward amongst the defence and into the box, White’s cross hitting Bristol defender Hannah Short to bring the score level.

But the home side would reassume their lead before half-time, Christie Murray lifting the ball over Gibbons and into the back of the net.

Weir almost added a third twice before half-time, first watching an audacious long range effort fly wide before being denied by Gibbons’ quick reaction save. Not long into the second half however, the Scottish international would make it 3-1 after converting a cross sent in from the left.

Staniforth, as she had against Arsenal, attempted to score from the restart and was only denied by a fingertips save from Earps. Taking the corner short and receiving the ball back, Staniforth was once more thwarted only by Earps who again sent the strike out for a corner.

Ashley Hodson had replaced Pacheco at the break, with Harris moving across to cover left-back and Ryland going to the right side of defence.

Working tirelessly again up front Dowie was drifting out wide to pick up the ball, winning multiple corners that Liverpool were unable to take advantage off.

Dowie had the ball in the back of the net after good build up play by the Reds, Ryland’s throw finding Omarsdottir who was quickly closed down and passed back up the line to Ryland who then picked out Zelem; the midfielder setting Dowie up with a through ball who finished nicely but the assistant referee had flagged for offside.

Bristol also had a goal disallowed for offside shortly afterwards, however soon made it 4-1 with Tatiana Pinto getting on the score sheet

With the score at 4-1 Liverpool refused to back down, Zelem shooting wide after a cut back from substitute Asisat Oshoala and Staniforth having a driving free kick blocked.

Dowie pulled a goal back after a series of corners. White swung a corner in towards the back post, this was headed on by Bonner and sent over the line by Dowie – scoring her 6th goal past Bristol this year.

They kept pushing, looking to close the gap further, Dowie cutting in from the left to win a corner in a move that mirrored an earlier move. This came to nothing and after 4 minutes of added time, the already relegated Bristol side finished their season with a 4-2 win.


The defeat caps a disappointing league season for Liverpool Ladies, never able to get off the ground and marred by injuries to key players throughout – Corina Schroder missing the majority of the year, Fara Williams still yet to return after 3 months out and Kate Longhurst the most recent to be side lined.

Despite this, there are positives the Reds can carry forward into the next season – for whichever manager comes in. The players have shown grit and determination, especially young players Maz Pacheco, Katie Zelem and Ashley Hodson who might not have had the game time without the injuries.

It was also pleasing to see Shannon Beckwith on the bench against Bristol, Beckwith is a talented young centre-back who reads the game well and captained the club’s development side to the league title earlier this year. Rachel Darbyshire and Mollie Green have also gained valuable experience being around the first team both in training and on match days.

Gemma Bonner has performed remarkably for a struggling side, Martha Harris has had a fine second season, Natasha Dowie’s goals once again proving a bright spark and Kate Longhurst had been exceptional up until her injury – playing every position but goalkeeper.

Liverpool have an important trio of games over the next couple of weeks, starting with an away tie at Brescia CF this upcoming Wednesday in the Champions League Round of 32 and the home leg a week later – both games will be screened live on LFCTV. In the middle of the Champions League games the Reds also face Notts County in the Continental Cup semi-final at Select Stadium, Widnes, Sunday 11th October.

Get behind the Reds. Tickets available for both home games on the gate.

PLAYER OF THE MATCH Ingrid Ryland