Liverpool Ladies supporters in attendance this evening were treated to debut home performances from no less than 6 players.

Winter signings Lucy Staniforth and Gemma Davison were each handed a place in the starting line up, Staniforth making her first start since returning from injury. Martha Harris and Libby Stout were both second half substitutes while development squad graduates Katie Zelem and Ellie Stewart also entered the fray in the second half.

An unusual line up change meant Libby Stout played the first 45 minutes in goal for Doncaster, switching at half-time with Danielle Gibbons who had had a busy 45 minutes in the Liverpool goal.

Liverpool also named a trialist amongst the starting 11, keep an eye on the official LFC Ladies twitter for any developments with that between now and the start of the season. 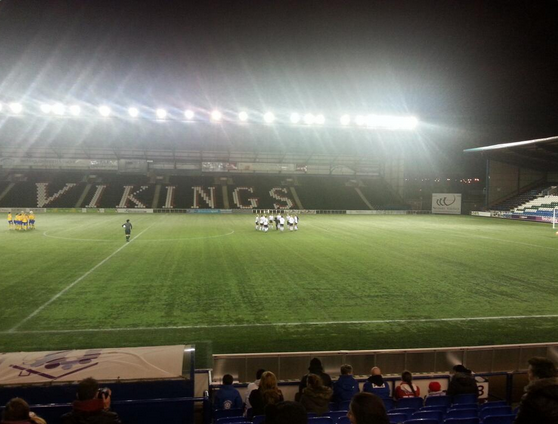 Doncaster Belles kicked us off in the first half, immediately the game picked up a fast pace with both sides showing attacking intent. Matt Beard had named two strikers in his starting 11, Kate Longhurst and Natasha Dowie, with Longhurst seemingly playing just behind Dowie. Both strikers linked up well throughout the first half, Longhurst doing everything but scoring with a number of strikes going agonisingly close.

Early in the first half an impressive Gemma Davison broke down the right wing, cutting the ball across the field from distance to Lucy Staniforth who tried her luck from 40 yards but the shot went into the stands.

Sue Smith was ever the attacking threat on the left for the Belles, Lucy Bronze had her hands full particularly during the first half when Smith was sending ball after ball into the Liverpool box. Danielle Gibbons dealing well with any balls sent her way, being forced into a dive on a number of occasions.

Bronze towards the end of last season established herself as one of Liverpool's most important players, tonight she had yet another excellent game at right back. Battling for the ball, running up and down the wing and despite moving into centre-back when Becky Easton replaced captain Gemma Bonner still finding herself in the 6-yard box at the other end being unlucky to break the deadlock on around 80 minutes.

Gemma Davison was the catalyst to many of the Liverpool attacks, showing off the pace and skill she is renowned for and that she displayed against us with Arsenal in August last year. Davison almost set Fara Williams up after flicking the ball brilliantly around the Doncaster defender and into the path of Williams, her chip only saved by the goalkeeper at full stretch.

At a number of points during the game it felt as though there was no way through the Doncaster defence, Katrin battled her way through the centre of midfield with her strike being put out for a corner. The resulting corner being cleared but only into the path of Staniforth who's blocked shot went back to Katrin who's goal bound strike was saved. Minutes later Kate Longhurst tried a low shot from 6 yards out, parried away only as far as Williams who's sideways pass found Staniforth. Staniforth's strike was hit into the path of Natasha Dowie but the goals continued to elude Liverpool and again the shot was saved.

During the second half, Natasha Dowie and Kate Longhurst linked up well again as Longhurst chested the ball down into the path of the oncoming Dowie but her shot went inches over the bar. 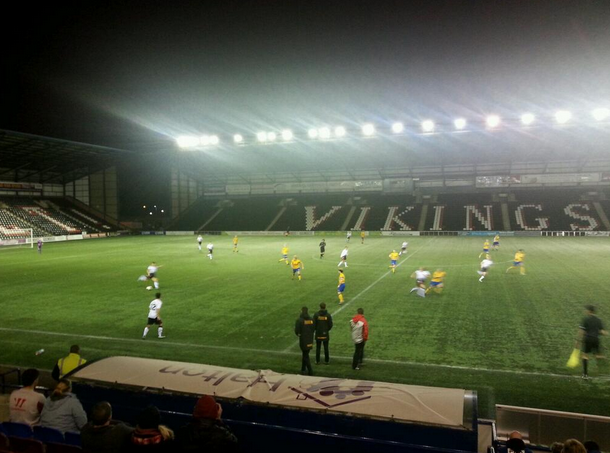 Martha Harris replaced Corina Schroder at half-time, Lincoln's Player of the Year last season also making an immediate impact doing well under pressure shielding the ball from Doncaster's Millie Bright and safely into the hands of Libby Stout. Harris also impressed attacking down the left wing, linking well with the midfield and making it look like she was playing three positions at once!

Two players introduced during the second half, Katie Zelem replacing Lucy Staniforth and Ellie Stewart replacing the trialist have both been enjoying fantastic seasons with the development squad over the winter break. Both receiving deserved call-ups into the first team squad. Ellie Stewart in particular seems much older than her 17 years when on the pitch, already a commanding presence at centre-back. It was Stewart too who finally broke the deadlock minutes from time, meeting Fara Williams' corner powerfully to head home and give Liverpool the win.

Much more happened during the course of the game, Kate Longhurst perhaps having the unluckiest 90 minutes in front of goal doing everything but scoring. For all the match updates and play by play as it happened, check out the Twitter feed at @LFCladiesfans

A very enjoyable evening back at Halton watching the first team, thanks for reading this match report and welcome to any new followers on Twitter this evening!

This Saturday Doncaster Belles will visit the Select Stadium, Widnes for Liverpool Ladies first home pre-season friendly. Kick off is at 6:30pm and entry to the game is free!

On Sunday Liverpool were away at Sunderland WFC, starting 2014 with a 2-0 victory over last years Premier League winners and this years FAWSL2 newcomers. Rachel Laws, our title-winning keeper, has now of course returned to Sunderland after completing her loan spell with us and came on for the second half.

Natasha Dowie picked up were she left off last season, tapping home a Nicole Rolser cross from close distance while Amanda Da Costa was also on the score sheet; scoring her first Liverpool goal since her double in the 4-0 league win away at Arsenal. 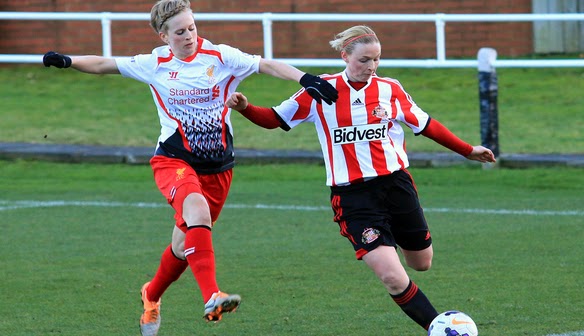 Liverpool's four new signings all made their debuts on Sunday, new number 1 Libby Stout playing the first 45 minutes before Danielle Gibbons replaced her at half-time. Gemma Davison also started and played the full 90 minutes while Martha Harris and Lucy Staniforth were both second half substitutes, Staniforth making her return from injury having not played since last May.

Also making their first appearances for the first team, Ellie Stewart started while Ashley Hodson, Katie Zelem and Hannah Dale were all named substitutes for the game. Their good performances for the development squad over the winter break clearly impressing Matt Beard enough to call them up, hopefully we will also see them at home this Saturday. 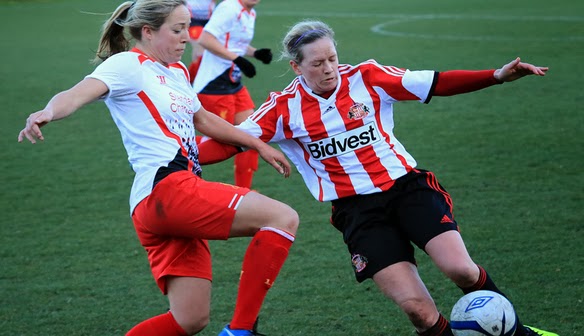 While Doncaster Belles will be playing in the new FAWSL2 this season, they have managed to keep many of their star players. Vicky Williams, Sue Smith, Millie Bright and Bethany England to name a few players that have stuck with the Belles as they attempt to win promotion this season. The Belles also have a new manager, Gordon Staniforth - which of course makes Saturday nights tie being a family affair with our new midfielder and Staniforth's daughter Lucy!

To conclude this match preview, the latest Women's World Football Show features a Liverpool Ladies preview. I join Adam in previewing Liverpool Ladies for 2014 and we discuss last season, new signings, Matt Beard, Natasha Dowie, Lucy Bronze, Whitney Engen and of course our chances of retaining our league title this year! Also on the show Adam and Patty have a matchworn, signed Lucy Bronze shirt to give away. The Liverpool preview is about half way through the latest show, the question to win the Bronze shirt comes shortly after. Thanks very much to Adam & Patty for having me on the show, WWF Show is a twice-monthly podcast bringing you women's news from the UK and USA and is well worth a listen.

LISTEN TO THE SHOW HERE.

Thanks for reading, hope to see you at Halton on Saturday! 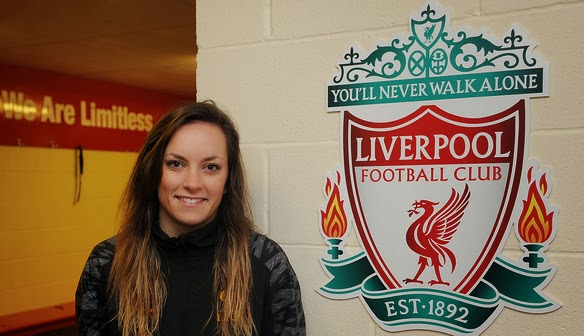 Lucy began her career at Sunderland Ladies alongside Lucy Bronze, before moving to Lincoln Ladies where she scored 9 goals in 27 appearances.  In late 2012 Staniforth moved to Bristol Academy,  playing half a season and making 9 appearances before suffering a serious knee injury in the 2013 FA Cup Final against Arsenal.
Staniforth has also represented England through the age groups, right up to Under-23 level.  Her first senior cap probably only delayed due to injury.
Staniforth scores Lincoln's winner vs Liverpool in May, 2011 (no37)
Lucy Staniforth is a fantastic addition to our title-winning squad and adds to our brilliant attacking force that already includes some of the leagues best attacking players.
Follow Lucy on Twitter here.
Thanks for reading @LFCLadiesFans
Posted by Hi I'm Heather at 12:45 No comments:

The first Liverpool Ladies home game of 2014 seen the development squad battle Doncaster Belles to the final whistle for a share of the points.

Three players returned from international duty with England, Olivia Wild, Hannah Dale and Claudia Walker have all been involved in training camps and friendlies this week with the England Under 19s. Olivia Wild also made her return to first team action after injuring her wrist in the last competitive fixture last year.

Missing from the squad were Ellie Stewart, Katie Zelem and Danielle Gibbons, all three players are now training with the first team who returned from the off-season last week. Replacing keeper Danielle Gibbons was new signing from Blackburn Rovers Gemma Jackson.

The game started similarly to the last two home games for the development squad, neither side really troubling the others defence and a few strikes from distance outside of the box. The game began to settle around the 15 minute mark, Liverpool beginning a nice passing move which led to Ashley Hodson shooting just wide after being fed through by Bethany Donoghue. 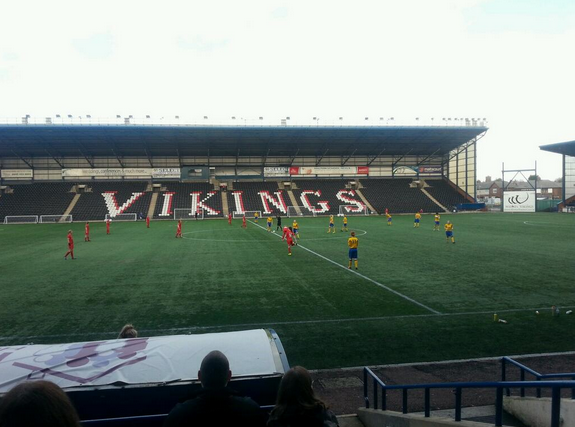 Throughout the 90 minutes, the game was end-to-end. The Liverpool defence and new centre-back pairing of Sophia Riccio and Shannon Beckwith withstanding the pressure from the Doncaster attacks, Hannah Dale also made a couple of important challenges during the first half. Dale was effective at both ends throughout the match with a couple of long range efforts either side of half-time.

New signing Gemma Jackson impressed on her debut, Doncaster perhaps had more shots on target than Liverpool but Jackson dealt with each strike well. During the first half a low cross came into the box which the Doncaster striker attempted to tap past the keeper, Jackson stayed on her feet to clear the ball.

The two full-backs Olivia Wild and Megan Alexander also had impressive games on the flanks, as Natasha Dowie mentioned on LFC TV's Thursday Night Live the other night Matt Beard has his full-backs playing higher up attacking like wing-backs and this seems to be the case for the development squad also.

Claudia Walker and Ashley Hodson up front also continued their good form from last year, Walker with a fantastic chance in the first half weaving her way through the midfield before shooting on goal and Hodson with an agonisingly close effort with about ten minutes to go in the second half. Walker squared the ball to Hodson in the 6-yard box but the strike went the wrong side of the post. 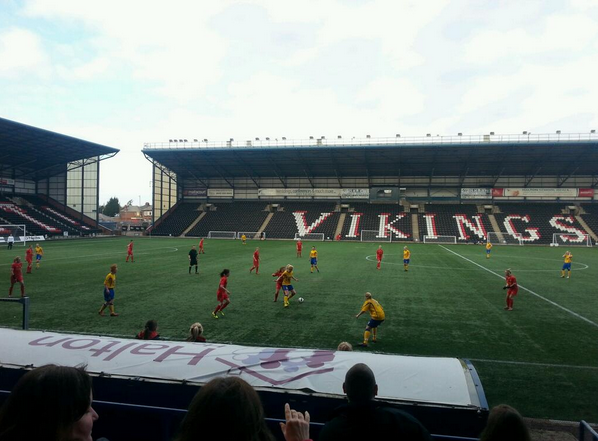 Hannah Dale perhaps had the games greatest chance, pulled down on the edge of the 18-yard box in the first-half, Dale stepped up to take the free kick herself. The ball swung in and dipped but crashed off the underside of the crossbar before being cleared.

Victoria Rumsey and Emilie Revitt were both second half substitutes, replacing Rebecca Hillman and Megan Alexander. Revitt linking up well with Riccio in the dying minutes to thwart a final Doncaster attack and keep the score level at 0-0. 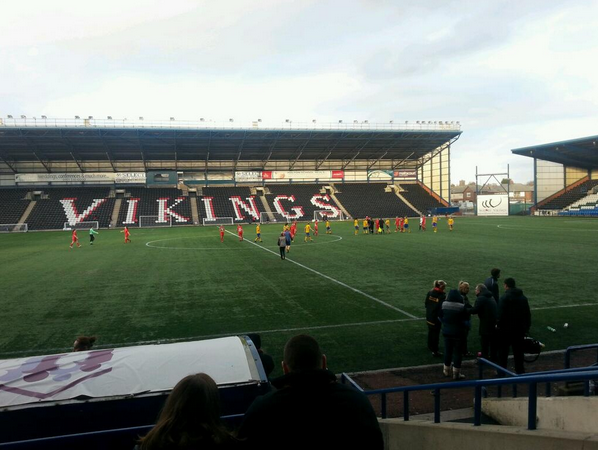 POTM: Could have gone to a number of players today, Hannah Dale gets more impressive in the centre of midfield each game, Olivia Wild had a great game at left back against tough opposition, but Player of the Match today goes to Bethany Donoghue who was a constant attacking threat on the right of midfield, putting cross after cross into the box and being very unlucky that none of these were converted past the Belles keeper.


The squad now has a couple of weeks before their next game, away at Duham. The next home game listed here is against Notts County on 30th March.

@LFCLadiesFans
Posted by Hi I'm Heather at 20:34 No comments: