Who are we playing? Sunderland Women's Football Club
Where? Away, SWFC usually play their home games at Hetton Centre however due to this being unavailable this tie will be played at The Academy Of Light. Due to this change there will be no admission to the game on the day.
Injuries? Sunderland have 2 players out, midfielder Rachel Furness and striker Natalie Gutteridge.

Sunderland currently play in the Women's Premier League which is a division below LLFC, however they are one of the teams hoping for a place in the revamped Women's Super League from next season.  Sunderland have won the Premier League the last two seasons, also winning the League Cup during this time. This season they sit 5 points clear at the top again having won 9 and drawn 3 of their 12 games. Both team progressed to the quarter finals with big wins, Liverpool won 5-0 away at Aston Villa while Sunderland beat Manchester City 4-0.

Random fact: Liverpool defender Lucy Bronze came through the academy at Sunderland and played for their senior team from 2007-2010. 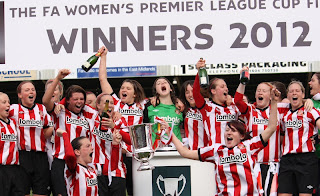 Hi, welcome to my new blog!

This blog is aimed at bringing you the latest from Liverpool Ladies. As a huge supporter of the ladies team I have set up a twitter, which you can follow here & I want to bring you the latest news from a fans point of view.

In the coming weeks I hope to bring you player profiles, match previews & reports and more!

All opinions are my own and I am not affiliated with Liverpool Ladies in any way.