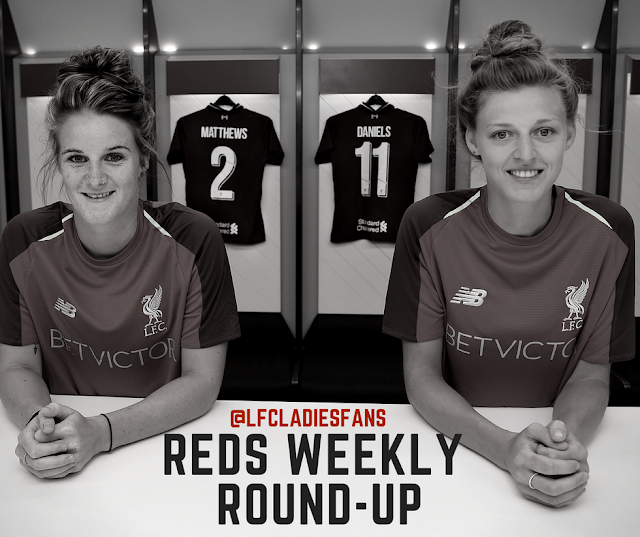 Welcome to a new section on @LFCladiesfans wherein - believe it not - all the weekly news from the Reds will be rounded up.

Liverpool returned for pre-season training this week, so now seemed as good a time as ever to get this off the ground.

This week started with a bang with not one, but two new signings.

First to be announced was Bristol centre half Jasmine Matthews, joining the Reds after spending her entire career so far at the South West outfit.

Jasmine is a highly rated defender; voted the Vixens Players' Player of the Season 17/18, part of the side that battled Liverpool for the WSL title in 2013 (picking up Young Player of the Season the same year) and comes with experience in the Champions League after reaching the quarter-finals with Bristol in 2014.

Off the pitch Jasmine is just as lauded. Since she signed on Monday @LFCladiesfans has received messages and tweets from numerous Bristol supporters saying how much time Jasmine has for fans and the defender was also awarded a PFA Community Award earlier this year.

The day after Jasmine was unveiled as a Red, her Bristol team mate Yana Daniels was also revealed as the latest player to commit to Liverpool.

Yana joins the club after making an impressive comeback from a potentially career-ending injury last year to represent Belgium at the European Championships and is also a Liverpool supporter, making this move all the more sweeter for the winger.

The Reds new number 11 is an exciting attacker, a direct player with an eye for goal. Bristol Development Squad player Ellie Strippel told me that Yana is a "proper team player, a good person to have around the team" who "always looks out for her team mates and is a great person to look up to for younger players."

Liverpool held their inaugural forum meeting on Tuesday 12 June with seven supporters selected to represent the fanbase from online applications.

Many topics were discussed as revealed on the official website this week, I've picked out a few bits to share here but you can read the full article here: Reds host inaugural forum meeting with fans

Several players were away on England youth international training camps and have joined the squad later in the week.

Ashley Hodson was also on the training gallery as the forward begins her rehab following an operation on her knee.

There'll be opportunities to watch the Reds soon as the pre-season fixtures have been announced, as far as I'm aware so far the only one to be played behind-closed-doors will be the first game against Manchester United on the 15th. Keep an eye on the official @LFCLadies twitter page and on @LFCladiesfans for any updates.