A return to the WSL for Niamh Fahey

Liverpool added another international star to their ranks earlier today with the signing of Republic of Ireland player Niamh Fahey.

Niamh is comfortable playing in defence or midfield and spent last season playing for Bordeaux in the French league. Prior to her time in France Niamh played for both Arsenal (six years) and Chelsea (three years).

In her own words Niamh describes herself as an "intelligent player" who "reads the game well", "I like a good tackle, strong, committed, like to play with the ball - a bit of everything really."

Our new signing is also a massive Liverpool fan who says she cannot wait to pull on the red shirt for the first time. 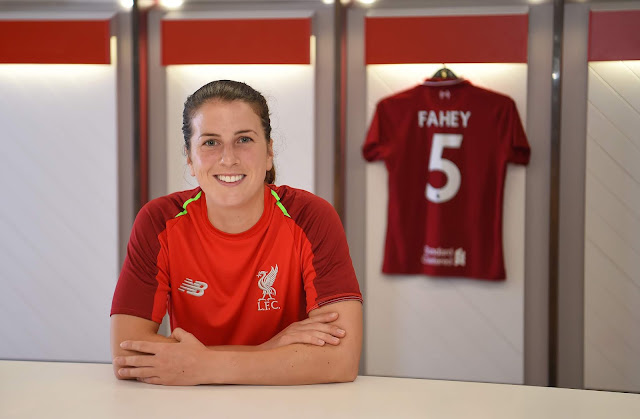 Signing a player with the experience of Niamh, a proven winner with multiple medals to her name, will do wonders for the new-look Reds.

Excited to find out more I contacted Sophie Downey - one half of the excellent and long-time friends of this blog Girls on the Ball - to get the scoop on our number five.

Sophie supports Arsenal and has watched Niamh play many times over the years, first with the Gunners during her six-year spell in North London and then with Chelsea from 2014, and started by telling me "you've definitely got yourselves a good one there."

Niamh is "extremely solid, versatile (seen her play centre back, left back and in midfield) and a strong passer of the ball.

"The experience she brings will do wonders for Liverpool on and off the pitch - she's won everything there is to win domestically several times."

Sophie added that Niamh is a lovely person who will be great with the younger players at the Reds, super smart having worked in biomedical science in the past and told me she would have her back at Arsenal "in an instant."

As for a memorable moment, back in April 2013 Niamh suffered an injury to her ACL and made her comeback in 2014 to feature towards the end of the Gunners FA Cup run - picking up the trophy in only her second game back.

Every player the Reds have signed so far this summer brings something different to the side, yet in many ways display similar attributes - hard working and genuine people.

It's going to be a good year, welcome to Liverpool, Niamh!
Posted by Hi I'm Heather at 15:39