Razza Roberts checks in with the Reds

Today Liverpool announced the signing of Razza Roberts, a defender from Chester who began her playing career at Blackburn before moving to Doncaster in 2013.

Razza has played for the Belles since, impressing Wales head coach Jayne Ludlow to earn an international call up. At the time of her first call up Doncaster skipper (and new Reds centre half) Leandra Little said of our new number four;

"You know what you are going to get, week in, week out and she puts her body on the line for the team.

"She's very strong in the tackle but also has the ability to spread the ball around the pitch." 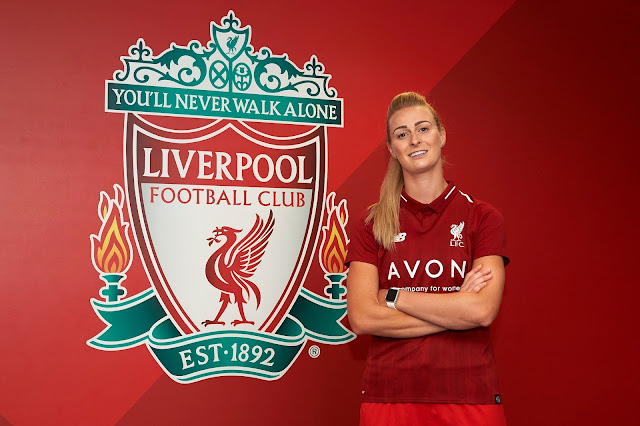 In Razza the Reds are getting a player with a big personality, popular with team mates and supporters alike. Former Liverpool forward Tash Harding commenting earlier: "You've got a great one there!"

Having spent plenty of time with Donny Belles supporters over the years, I messaged Sarah Maye earlier to find out what Reds fans can expect from Razza on and off the pitch.

Sarah is a long-time Belles supporter and member of Belles Noisy Fans (yes the ones with the bells) and has told me the Reds have signed an absolute gem in Razza.

When I asked what kind of player Liverpool supporters can expect, Sarah said "Uncompromising! Razza will put her entire being into every game, every challenge. Blood, sweat and tears for the cause but all with a big grin on her face."

Razza is capable of "pinging diagonal passes half the length of the pitch, throwing her body on the line to block shots and maybe coming up with a headed goal or two."

Doncaster players famously have a reputation across the league for the strong bond between team and  supporters and Sarah tells me, "off the pitch we talk about the Belles family a lot and Razza is the sort of player that epitomises that. If you've got her back, she'll have yours, she's a gem.

Sarah finished by telling me of a memorable moment involving Razza and her love for gravy, not going into much detail but that there was a time - at the Select Security Stadium no less - that our new signing mistook sweet and sour sauce for gravy!

Since I spoke to Sarah news broke that Doncaster have had to pull out of the FA Women's Championship and drop down to the National League. I am genuinely gutted for all the fans I've gotten to know over the years and everyone connected with the club, and would like to use this to say to all Doncaster, Sheffield and Notts County fans that you're all welcome at Liverpool matches.
Posted by Hi I'm Heather at 22:35