At the end of the 2017/18 campaign Jasmine picked up the Vixens Players' Player of the Season award and joins the Reds having spent her entire career at the South West club.

With a reputation across the Women's Super League as a steady, solid and reliable centre half, Jasmine is a past recipient of Bristol's Young Player of the Season. This honour notably coming in 2013 after a superb Bristol side battled Liverpool for the league title until the final game of the season.

Jasmine also starred in Bristol's exciting run in the 2014/15 Champions League campaign, which included a brilliant victory over Barcelona on aggregate. 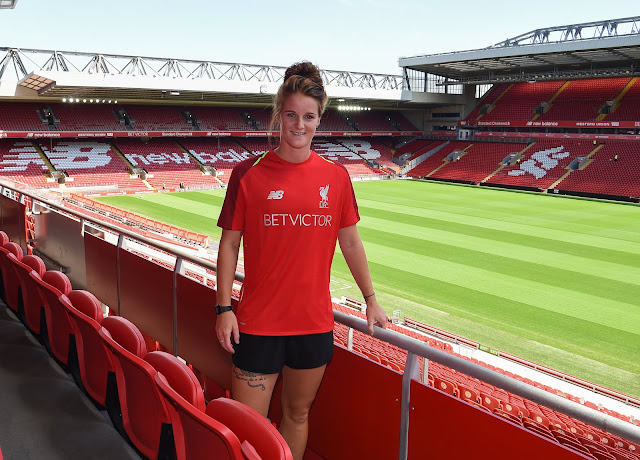 Across football, and without liking to generalise, supporters appreciate players that come across well as much off the pitch as on it and Jasmine leaves Bristol with plenty of goodwill from Vixens fans and players.

A quick glance across the replies on her thank you note to supporters show the words 'legend' and 'inspiring' show up on several occasions along with multiple variations on 'always gave everything'.

Exciting signs that are matched upon further delving into social media, Jasmine a prominent member of the local Bristol community in youth football and at food banks - so much so that our new number two was awarded the PFA Community Player of the Season earlier this year.

Unlike Leighanne last week, I have seen Jasmine play a fair few times. However since that blog went down a treat I've once again spoken to someone who has seen her play a lot more than me, my friend and massive Bristol fan Keila.

Keila says that Jasmine is "a hard working and determined defender who isn't shy of a hard challenge, very reliable at the back but also a strong leader with a lot of experience behind her despite still being quite young.


Liverpool fans can expect a fully committed and hard working player with Jaz who gives her all in to each game but is also a lovely person on and off the pitch."

All in all, and forgive me if this sounds like I am getting ahead of myself, this genuinely feels like a fresh start for the club and with more new signings imminent I'm excited and you should be too.
Posted by Hi I'm Heather at 16:52